A blog post highlighting the article by T. Chouvenc in Insectes Sociaux

Alates of Coptotermes gestroi emerging during a dispersal flight event, with soldiers guarding the exit holes.

Sexual selection and partner choice have been hot topics in behavioral ecology over the past few decades, as scientists have been investigating impressive cases of sexual dimorphism and extreme attributes both in vertebrates and arthropods. In some social Hymenoptera, the males are often reduced in size and function compared their female counterparts. The need for a massive accumulation of metabolic reserves in these males has decreased over evolutionary time as their role has been reduced to simple yet functional sperm missiles. In termites, such extreme reduction of the male size is not present (despite cases of significant sexual dimorphism): both the female and male are essential during colony foundation as they provide exclusive monogamous biparental care within the first few months of the life of the colony. The royal couple will then spend years, sometimes decades together, contributing solely to reproduction. One might argue that such lifestyle should promote the evolution of ‘picky’ mate selection.

However, during the dispersal flight and colony foundation of termites and many other eusocial insects, the potential for partner selection may be minimal due to the chaotic nature of mating swarms, when individuals only have a few minutes to find a partner and create an incipient colony or die. My anthropomorphic self likes to see it as an extreme form of speed dating. This mating behavior implies that being too choosy in mate preference would be counter-selected, especially when predation pressure is high. However, some lines of evidence suggest that ‘high quality’ primary reproductives could experience improved mating success, survival traits, fertility, and ultimately colony foundation success. Hence, despite an overall absence of mate selection, there could still be passive evolutionary selection for alate size or quality.

The first selective force, as outlined by Nalepa (2011), is inherent to the biology of termites. Both the king and queen are monogamous partners, and each contributes to the biparental care of their first cohort of offspring. However, as the first functional workers emerge, the brood care duties irreversibly shift to the workers, resulting in constant alloparental care as the queen and king lose their ability to provide care for their brood (Chouvenc and Su 2017). Nalepa argued that in incipient termite colonies, the rapid switch from biparental care of the first brood to alloparental care of subsequent brood has resulted in reduced selection for the accumulation of large metabolic reserves in imagoes. As evidence for this, queen and king fecundity is maintained despite a relatively small body size (when compared to their ancestral wood roaches). The directional reduction of body size in termite imagoes may, therefore, have allowed mature termite colonies to increasingly invest into the number of alates to optimize their dispersal success rate. 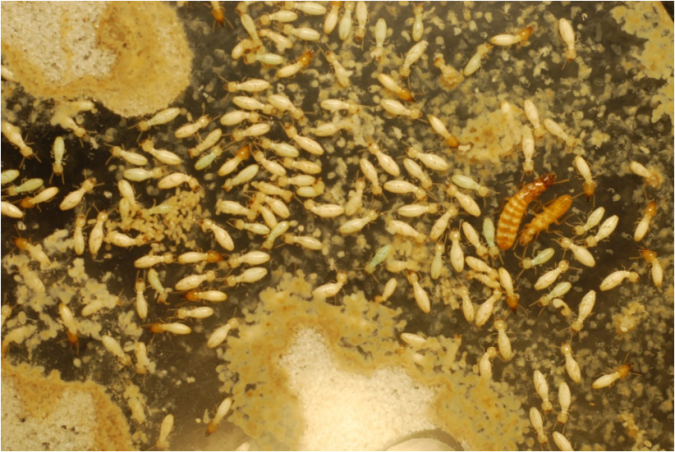 The second selective force is opposite to the first one, as the limited metabolic reserves of relatively small termite alates during colony foundation leaves little room for inefficiency. The quality of the first brood is important for colony foundation success and the initial input from the queen and king are critical to jump-start the colony and improve its long term success within a highly competitive environment. Such pressure might incentivize mature colonies to invest in high-quality alates with enough internal metabolic resources to successfully produce their first cohort of functional workers during the incipient colony phase.

In dispersal fight events, Coptotermes gestroi alates may rapidly be killed by a wide range of predators. In this video, Pheidole megacephala was able to capture most alates that landed on trees or on the ground, which show how luck can be an essential factor on alate survival, independently of the quality of individuals.

In my 2019 study, I was able to take advantage of large dispersal flight events of Coptotermes gestroi (Rhinotermitidae) with high intracolonial and intercolonial variability in size to test the actual role of alate body size in colony foundation success and growth within the first nine months after foundation. I was able to measure 79% colony foundation success (n = 175), and most colonies that failed to establish had relatively small males and females, suggesting that mated pairs with relatively large individuals had a higher chance of surviving the first few months. This data suggests that, although the rapid transition to alloparental care in incipient colonies might reduce the need for accumulation of substantial reserves in alates, the mated pair still requires a bare minimum of initial metabolic resources to initiate efficient colony foundation and provide biparental care. Also, a positive correlation between the initial king and queen weights and colony growth was found despite high colony growth variability. Both the king and the queen initial weights were relevant for colony growth when considered separately, confirming the importance of biparental care, but when combined, only explained 27% of the observed variability despite highly standardized rearing conditions.

This study confirmed that during colony foundation in laboratory conditions, the initial weight of C. gestroi females and males plays a role in colony foundation establishment and initial colony growth rates. However, such laboratory results need to be placed in the perspective of the harsh conditions of field dispersal flights, where the vast majority of alates die rapidly and founding conditions are highly heterogeneous and hazardous. Therefore, the importance of alate weight may be secondary to many other environmental factors and luck. As previously suggested (Hartke and Bear 2011), sexual selection for large alate body size in termites during and after dispersal flights may be extremely weak and secondary to a wide variety of other selective pressures.

Alates of Coptotermes gestroi emerging from a tree trunk by the thousands and ready to fly out.

Mating flights in C. gestroi termites can comprise hundreds of thousands of alates, and the large number of alates produced may be more relevant to the final number of established incipient colonies than the marginal advantage that relatively large alates may have during colony foundation. Such a reproductive strategy primarily relies on “inundative” dispersal flights, which may also have reduced the importance of alate weights during colony foundation. The trajectory of the reproductive strategy of a given termite species may partially be reflected in the size of their imagoes, an investment into reproduction which reflects the life history of the species. Over evolutionary time, termite colonies have optimized this quality/quantity trade-off in alate production, which varies among species.

In the light of its remarkable invasive abilities and its high colony establishment rate in the laboratory, C. gestroi may be a termite species that is able to efficiently optimize such balanced investment and adapt to various environmental pressures during dispersal flights and colony foundation.