Watch a nature documentary of the South American tropics and it’s almost a given you will see some columns of leaf-cutting ants, busily carrying leaves back to their nest. Aside from their photogenic foraging behaviour these ants are also known for having developed the ability of farming, a feat only humans and some termite species have achieved. Perhaps less well known to the public, but equally as impressive, are their underground nests. The ants use the freshly cut plant material as a substrate to grow a symbiotic fungus, which is very voluminous and therefore needs a lot of space. Adding to the space demands of their nests are the high number of ‘citizens’ a single leaf-cutting ant colony can have, sometimes reaching millions (Moreira et al. 2004a, b). When scientists want to make casts of the nests to discover the intricate network of their nest chambers and connecting tunnels, they need tons and tons of cement to fill the complete structure (Forti et al. 2017). And yet, the tiny single workers measure less than a centimetre and weigh only 5-25 mg. How do these little, autonomous units coordinate their digging effort with thousands of other small units so that these huge functional nest structures are created?

The answer to this question is a process known as ‘self-organization’. The tiny workers with their very limited view of the nest structure react to very simply cues of their immediate environment and so decide where and when to excavate (Deneubourg and Franks 1995).

Having encountered an underground environment to their liking, the workers dig with their mandibles into the earth and, as if it would be a piece of vegetation to harvest, ‘cut’ out little bits of soil, which they then discard outside of the nest. Digging is a strenuous process and a colony spends considerable energy excavating their nest. What the ants gain from such a herculean effort is a structure that offers the colony, and in the case of leaf-cutting ants, their symbiotic fungus (on whose survival colony success depends) an environment suitable for both.

Underground, the three main environmental factors are temperature, humidity and carbon dioxide. The latter is quite frequently mentioned in the media in connection with global warming, where even seemingly small increases in CO2 levels can lead to dramatic environmental changes. Subterranean ants are confronted with CO2 concentrations vastly exceeding atmospheric levels (currently ~0.04%), even very close to the soil surface. These levels increase even more with depth so that 5-6 meters underground ants encounter an environment with 6-7% CO2 (Kleineidam and Roces 2000; Bollazzi et al. 2012). At these high levels, the growth of the farmed fungus seems to be compromised (Kleineidam and Roces 2000), so that leaf-cutting ants should try to control carbon dioxide levels to ensure the best possible fungus harvest. A recent study showed that when given the choice, the leaf-cutting ant Acromyrmex lundii indeed avoids such high CO2 levels for fungus farming and, surprisingly, also atmospheric levels (Römer et al. 2017). Instead, it chose levels associated with soil strata close to the surface.

Acromyrmex lundii is a species whose nest is usually characterized by having only superficial nest chambers. This is apparently not due to the inability of the ants to excavate under higher CO2 concentrations, as digging activity was comparable whether the ants excavated under atmospheric CO2 concentrations or levels of deeper nesting leaf-cutting ants. Only at 11%, a level so high that it was never measured around any leaf-cutting ant nest (Nielsen et al. 2003), the ants reduced their digging activity. Therefore, a negative effect of CO2 on digging activity does not seem to be the reason why this ant species only excavates superficial chambers. Soil pellet transport away from the digging site, on the other hand, increased when CO2 concentration underground increased. We do not know whether this was because ants were physically unable to excavate and therefore switched to soil carrying (masked at most CO2 levels by replacement workers) or whether ants ‘aimed’ to increase ventilation at the site by creating more open space. When creating a situation where workers could choose where they wanted to dig, they preferred superficial-soil CO2 levels and avoided levels of deeper soil strata. These choices help to explain the ants’ nesting biology.

One might therefore ask ‘Then why do other leaf-cutting ants excavate deep nests if the high CO2 concentrations there hinder the growth of their food source?’ The answer to this question might be a competition between the different environmental factors in the soil. Leaf-cutting ants should trade-off their microclimatic preferences to ensure the excavation of a suitable nest, but that is an experiment for another day

If you want to discover the secrets of life as a subterranean termite, you (literally) have to dig beneath the surface. Hidden from view, termite colony members (namely workers) are busy excavating and connecting networks of foraging tunnels to various food and nest sites. Each termite worker is small, delicate and soft-bodied, yet is formidable and impressive as part of its larger colony. A colony containing thousands to millions of termites – made up of workers, soldiers and reproductives – can build hundreds of intersecting tunnels within an hour and in urban centers a single colony can stretch across several city blocks. How they determine who belongs to which colony, however, is not as clear as you might expect.

One integral aspect of social living is maintaining well-defined colony boundaries through the defense of nest territory, keeping colony members safe in the colony and defending the colony from intruders. Among termites, both workers and soldiers participate in defensive behaviors, which can be both active (i.e. biting, lunging, stinging) and passive (social avoidance or blocking tunnel entrances) (Šobotník et al., 2010; Prestwich 1984). However, in some cases, colonies may take on a more diffuse form with no obvious inter-colony aggression or nestmate recognition. Why some colonies are well defined (‘closed’) while others are diffuse (‘open’) is not well understood.

To find out more, we studied Canadian populations of the Eastern subterranean termite (Reticulitermes flavipes), as they provide an interesting case study in nestmate recognition and territorial defense. Colonies of R. flavipes are found in isolated pockets in Ontario, having been introduced to the province on at least three separate occasions (Scaduto et al. 2012). Populations show a mixture of open versus closed societies, they may vary in their propensity for inter-colony aggression or resource defensiveness, and their differing backgrounds provide a potential source of genetically variable recognition cues (Scaduto et al. 2012). In the City of Toronto, termite colonies show low levels of genetic diversity, low inter-colony aggression (Grace 1996), and are more typical of invasive ‘open societies’. In contrast, termites in the Pelee region form discrete colonies that are genetically well differentiated from each other (Raffoul et al. 2011). The Pelee termites live independently of any human habitation, are potentially native to the area (Kirby 1965) and are effectively ‘closed’ societies.

Finding out about the cryptic world beneath our feet is not always easy. As termite behaviour occurs underground, we need to collect a sub-sample of live individuals and study their interactions in artificial lab-designed arenas or assays to evaluate their behaviour. However, designing an assay that truly reflects field conditions can be challenging. One method common method in termite and ant aggression studies is using a Petri dish lined with moist filter paper. Although convenient and easy to replicate, this artificial situation may not reflect ecological context, particularly for termite species, which are soft-bodied and desiccate quickly in open air. In previous studies using Petri dishes, R. flavipes showed no evidence of aggression towards non-nestmates (either intra or interspecific) and possibly a lack of nestmate recognition (Polizzi and Forschler 1998; 1999; Bulmer and Traniello 2002a, b; Fisher and Gold 2003; Perdereau et al. 2011). 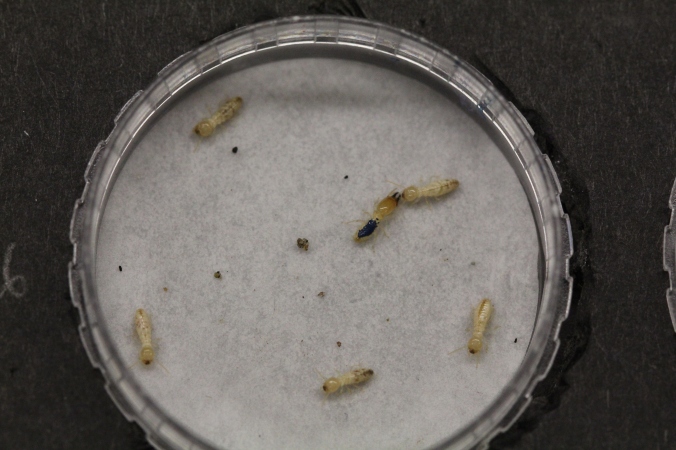 We paired Ontario populations (Toronto and Pelee colonies) of R. flavipes of varying geographic distance in both short-term (5-minute) Petri dish and longer-term (2- and 7- day) shared-resource assays, in order to test for evidence of aggression or nestmate recognition. The resource-design assay was meant to be more reflective of field conditions and introduce the soil interface, simulating two colonies meeting and foraging at a central food resource. In Petri dish trials, we found no evidence of aggression or nestmate recognition. However, in shared-resource assays we observed very little inter-colony mixing and high mortality in non-nestmate pairings, indicating that R. flavipes can sort and potentially compete on the basis of nest origin, and that this recognition is influenced by ecological context. In our study, the soil interface was essential as aggressive encounters occurred while the termites were foraging for new resources. This behavior would not be evident from Petri-dish style assays, which lack the soil interface and may explain why prior studies of nestmate recognition have had mixed results. These results therefore highlight the importance of designing an assay that accurately reflects the ecological context of a species.