A blog post highlighting the article that received the prize for the best paper published in Insectes Sociaux in 2018 by Paul J. Davison and Jeremy Field.

By Paul Davison and Jeremy Field 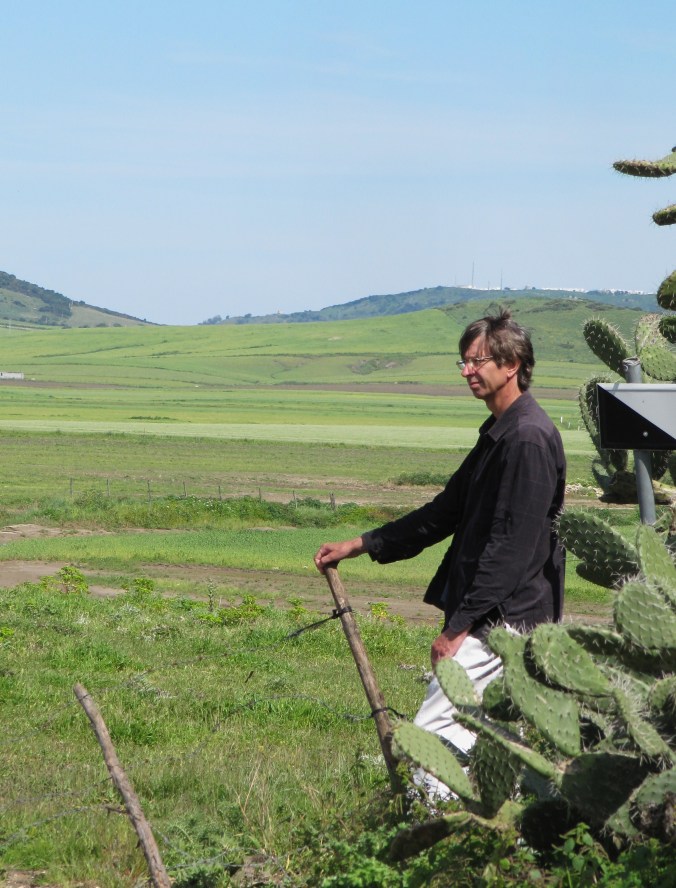 Jeremy at a Lasioglossum malachurum nest site in Spain

Paul’s Ph.D. focussed on the unusually varied social biology of sweat bees, which include eusocial species, solitary species and also socially polymorphic species. In socially polymorphic sweat bees, some populations have eusocial nests with a queen and workers, while in other populations of the same species all nests are solitary. Solitary populations are always found at cooler latitudes and/or higher altitudes than eusocial populations. Likewise, obligate eusocial species, in which nests always have queens and workers, never occur at the coolest latitudes or higher altitudes alongside solitary species or populations. The main element of the Ph.D. involved performing a field transplant to explore how the environment influences behaviour in a socially polymorphic sweat bee (for the results, see Davison & Field (2018) Behavioral Ecology & Sociobiology 72:56).

We thus became interested in what limits the geographic distribution of eusociality in sweat bees. It has long been thought that once the growing season becomes too short, it is no longer possible to sequentially produce the successive worker and reproductive broods necessary for eusociality and the only option is solitary nesting. Noticing that this had not been tested experimentally, we thought it would be interesting to do just that. The best way would be to conduct another transplant, only this time of an obligate eusocial sweat bee far to the north of its natural range.

We chose to transplant Lasioglossum malachurum, a well-studied obligate eusocial sweat bee that is restricted to the south and east of Britain. We wanted to investigate the reasons for this, and in particular whether it is related to the length of the season. Because of other fieldwork commitments, this project would have to be ‘smash and grab’, or ‘smash and transplant’. Jeremy had the ingenious idea of getting spring foundresses to nest inside plastic buckets and then transplanting them and their nests wholesale. To do this, we spent winter digging trenches adjacent to where the bees nested in southern England, filling buckets with the excavated soil then putting them back into the trench and filling in the gaps. In essence, digging holes and filling them in again! By transplanting buckets after nests had been initiated in spring but crucially before foundresses began provisioning, we could test how being in a northern environment with a shorter season would impact the eusocial lifecycle.

Embedding buckets in the garden of the University of Aberdeen’s Lighthouse Field Station at Cromarty (Photo: Paul Davison)

We were generously allowed to embed our transplanted buckets in the garden of the University of Aberdeen’s Lighthouse Field Station at Cromarty in northern Scotland. Cromarty is much further north than where L. malachurum occurs naturally and is a place most people have only heard of thanks to the BBC Radio 4 shipping forecast. Nestled between the 1840s lighthouse and stunning Cromarty Firth, the bees would certainly have a good view if nothing else. Equally generously, since it involves hours of scraping away at a block of soil on a table and is incredibly messy, Paul was able to excavate the buckets in rooms owned by the Cromarty Arts Trust. We transplanted control buckets to the University of Sussex campus, well within the bee’s natural range. All that remained was to see whether driving the length of Great Britain with buckets of nesting sweat bees would pay off.

The results were unequivocal. When we excavated the nests eight weeks after transplanting them, first brood offspring at Sussex were all nearing the completion of development, whereas in Scotland most offspring were still tiny larvae that had not long hatched. We estimated that this represented a lag of approximately seven weeks behind Sussex and that, had they been left to complete development, the first brood in Scotland would not have emerged as adults until August! This would leave no time for workers to provision a reproductive brood successfully. We found that the time lag corresponded to differences in temperature, which is well known to influence the timing of bee activity and seems to have caused foundresses in Scotland to begin provisioning much later in the spring. Importantly, this reflects environmental constraints on provisioning behaviour rather than the strategic shift between social and solitary nesting seen in some socially polymorphic sweat bees (Field et al. (2010) Current Biology 20:2028-31).

All in all, some intriguing results. Jeremy is planning to take this initial work further with more replicates and a detailed study of what exactly causes the time lag.