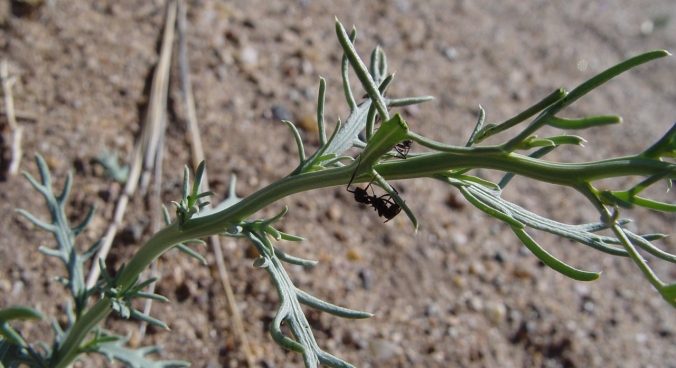 Alejandro Farji-Brener and Mariana Tadey received the prize for their paper “Consequences of leaf-cutting ants on plant fitness: integrating negative effects of herbivory and positive effects from soil improvement”. This paper appeared in the February 2017 issue of the journal and can be found here.

Looking at the ants, it was very impressive to see them harvesting a lot of plant species and dumping huge amounts of organic waste on the soil surface. We knew about the literature describing the potential negative effects of leaf-cutting ants as plant-damaging herbivores and the literature describing their positive effect on vegetation as soil improvers via dumping their nutrient-rich organic waste. Given these opposing effects of ants in an ecosystem, we wondered what their net effect was on the nearby plants. 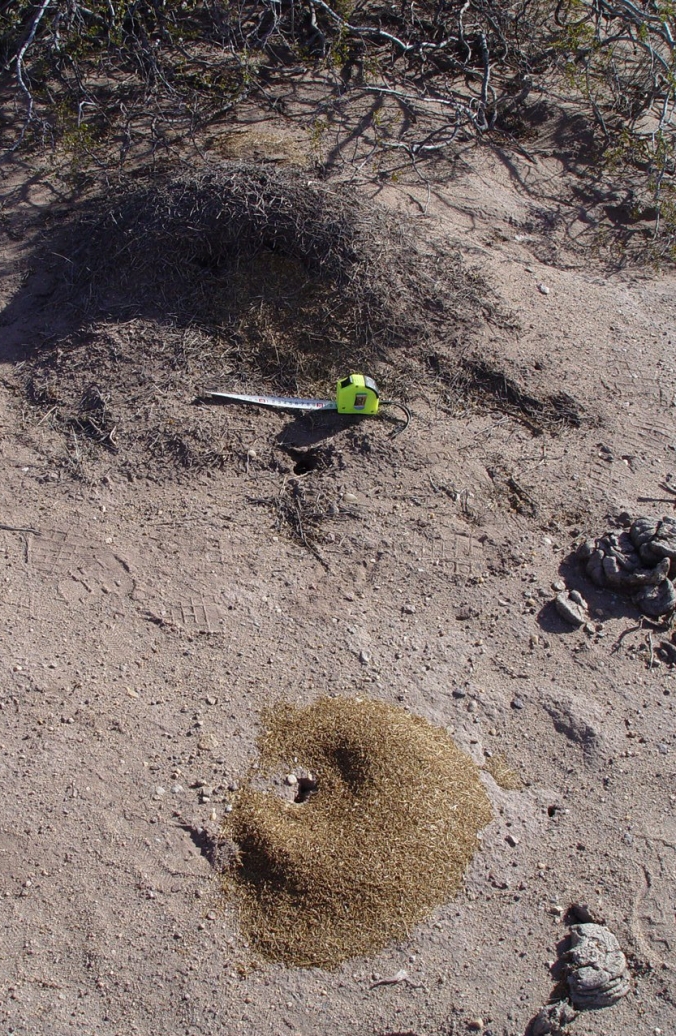 Acromyrmex nest mound (above, pictured with measuring tape) and its waste piles (below). Photo: Farji-Brener and Tadey

Up to this point, several studies demonstrated the trade-off between herbivory and nutrient intake under greenhouse conditions. However, there were few studies investigating what happens in nature were plants are subjected to both situations, the loss of green tissue by ant defoliation and the enhanced plant growth caused by the ant-generated organic waste piles. Given that in this water poor habitat, both the loss of photosynthetic tissue and nutrient availability are key factors for the health and survival of plants, we thought that the net consequence on plant fitness should depend on the relative importance of these opposite ecological effects. Hence, we started our research about the fitness of native plants growing on, or near, ant organic waste piles (our nutrient hot spots) and on bare soil.

In our study site, plant species were differentially subject to defoliation by leafcutter ants, but there was no clear pattern of growth compensation for defoliation due to plant growth on organic waste. We proposed that this lack of compensation was caused by the water limitations imposed by the aridity of this environment, which restricted nutrient uptake for the plants. Overall, our work suggests that the interpretation of nice outcomes from controlled experiments may be unsupported by work under field conditions, highlighting the importance of the ecological context in scientific studies. Studies like ours allow us to include the particularities of ecosystems into theoretical frameworks so we can improve our understanding of how ecosystems work. Our study also shows how collaboration among scientists can lead to a big change our understanding of how organisms interact in nature. 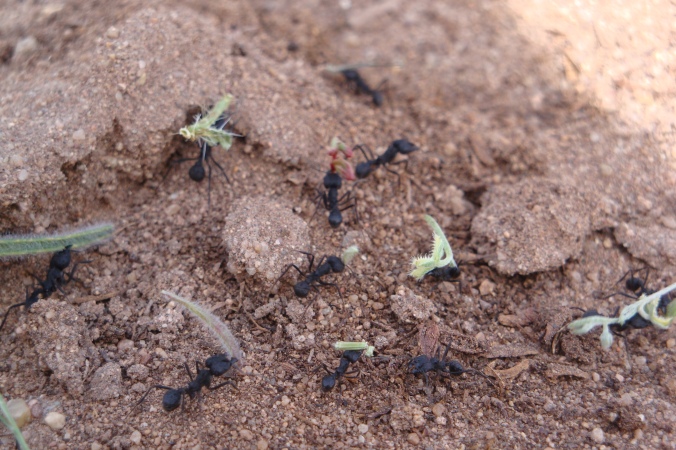 A blog post highlighting the article by C. A. Freas & K. Cheng in Insectes Sociaux

By Cody A Freas and Ken Cheng

Imagine that you travel from your house to your favourite restaurant by walking 10 blocks due west and then need to return home. Under normal circumstances you would simply walk back 10 blocks due east. Ant foragers travelling from home to find food, can easily return to the nest in this situation through a process called path integration. During path integration, ants count their steps to estimate distance and use the sky to keep track of their current direction, combining these two measurements to travel back home. Now let’s imagine a less conventional trip. After travelling 10 blocks to the west, you leave the restaurant and are suddenly transported 10 blocks south of home. The first time this occurs you may have some difficulty, yet if this happens every time you make this trip, you would most likely become rather talented at managing this new homeward route. Humans and other animals can deal with unusual navigational problems such as teleportation by using familiar visual cues like landmarks in their environment (Warren et al. 2017).

Ants can also learn to adjust their homeward trip when the outgoing and incoming journeys do not match, by shifting the direction of their path integration system. Ant foragers will keep track of their direction and distance on both the outbound and inbound portions of their foraging trips. On succeeding trips, an ant can learn to shift its homeward direction based on experience during previous trips, which is called calibration. Earlier work involving these shifts in ants has focused on Cataglyphis fortis, a north African species living in environments with no landmarks where these foragers are able to partially shift their homeward heading after being displaced every time they collect food from a feeder (Collett et al. 1999; Wehner et al. 2002). Yet these foragers are unable to fully shift their homeward direction to the correct nest direction even after many trips, instead taking a compromise direction. In the current study, we explored this navigational process in the Australian desert ant Melophorus bagoti, a species living in areas with many landmarks (buildings, trees and bushes) which could help guide these ants after being moved off their normal route. Each time a forager reached a feeder and picked up some food, we moved them to another location 45º, 90º, 135º, or 180º away from the nest-feeder path and then allowed them to return home. Before releasing each forager, we tested their homeward heading in a uniform arena designed to block the surrounding landmarks and only allow ants to rely on path integration to navigate. The purpose of this test was to see how quickly and the degree to which their path integration system changed or calibrated in response to having different outgoing and incoming trip directions.

We found that foragers learn to acclimate to teleportation quickly. After being teleported on three consecutive trips, these foragers began to choose a compromise direction between their original position and their teleported position. Furthermore, we found that these foragers continued to improve over the first ten trips ultimately reaching a plateau. The directional difference (45º, 90º, 135º, or 180º) of the outbound and inbound trips appears to affect the degree to which ants can shift to the inbound path. When the difference is small (at 45º), ants are able to shift completely to the homeward direction and many return directly home. Yet as the difference between routes increases, ants shift less, choosing compromise directions at 90º and 135º locations. When we transported the foragers 180º from the feeder route, the ants did not shift their homeward path at all. These ants will travel in the wrong direction every time they are moved 180º off outbound route even after 25 trips.

The underlying cause of the differences we find in M. bagoti when compared to C. fortis remain unknown, but it is possible that the presence of landmark cues plays a large role. M. bagoti inhabits a cluttered habitat with many landmark cues to guide them when they are moved off the outbound route, while C. fortis lives in a barren desert and must search to find the nest after being moved. The presence of landmarks during training in our study may help M. bagoti foragers find the correct homeward direction easily, resulting in larger shifts just as recognisable landmarks would help a teleported human return home from a similar trip. To further explore this question, we hope to replicate this experiment on a third desert ant species endemic to southern Spain (Cataglyphis velox) which is closely related to C. fortis yet lives in cluttered environments similar to M. bagoti.