Pit-building antlion larvae are predatory neuropterans which co-occur with some sand-dwelling ants, their main prey. The ants evolved rescue behaviours as means of avoiding antlion predation: when an ant stumbles into the pit and is captured by an antlion larva, its nearby nestmates may act to free it. No one knows how exactly that happens. 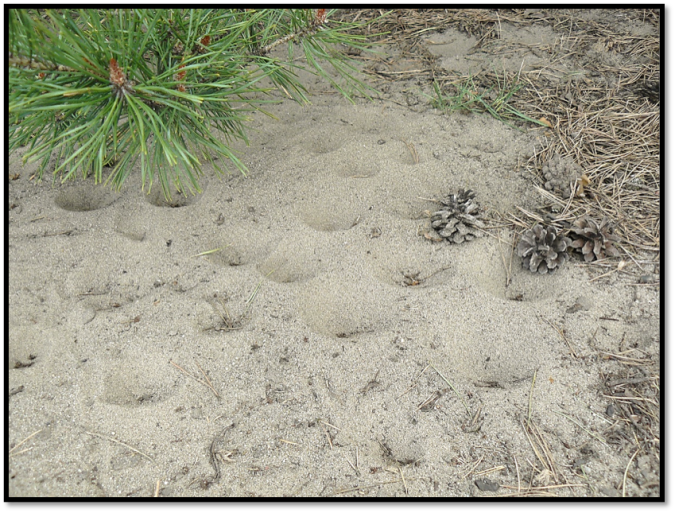 An example of the “antlion zone” with several antlion larvae pits (conical traps). When an ant stumbles inside one of these pits, its near-by nestmates may come to rescue. Photo: K. Miler [Błędowska Desert, Poland].

In 2002, Czechowski and his co-authors [1] observed that some species of ants rescue their nestmates from the pits of antlion larvae. Since their discovery, several papers about this phenomenon have been published. However, no one knows how exactly rescue behaviour is elicited. The main hypothesis states that when an ant stumbles into the pit of the larva and gets captured, it sends some kind of signal (“call for help”) which summons its nearby nestmates to the site of capture and triggers their rescue behaviour, but the form of this signal remains unknown.

I recently published a paper saying that soon-to-die ants stop calling for help and thus elicit lower levels of rescue than longer-lived individuals [2]. Prof. Martin Collinson tweeted shortly after my publication: “Moribund ants do not call for help. They’re probably too knackered to use their little ant smartphones.” But the call for help likely doesn’t come from a tiny smartphone.

If rescue is indeed elicited by a call for assistance, then in my study species, Formica cinerea ants, the “call for help” signal is most likely chemical, originating from one of glands releasing volatile substances. Together with my colleague, Karolina Kuszewska, we performed two experiments to test whether mandibular gland excretions elicit rescue behaviour. We focused on mandibular glands because they were obvious candidates due to their other communication functions in ants.

In the first experiment, we impaired communication of some ants via their mandibular glands and checked whether they were rescued less frequently than other ants with unchanged mandibular communication skills. In the second experiment, we dissected some ants and checked whether the content of their mandibular glands applied onto dummy-ants made of pieces of toothpicks would elicit rescue from nearby (real ant) nestmates.

Apparently, mandibular glands have nothing to do with the elicitation of rescue behaviour in F. cinerea. Blocking the release of excretions of mandibular glands has no effect on rescue frequency, and applying the content of these glands onto dummies elicited no rescue towards them. Our study is the first one to look into the mechanism of the “call for help” signal. We plan to perform another set of experiments looking into gaster-tip glands, aiming at finding out whether the mechanism of rescue behaviour in ants is as we currently assume it is. We expect that we won’t find a tiny Bluetooth device either.

An ant captured by an antlion larva summons its nestmate to the site. The rescuing ant grabs the victim by its leg and pulls, holding on even when the antlion larva starts to bury deeper in the sand to prevent losing its victim as a result of this rescue action. Unfortunately for the victim, the rescuing ant is not successful. Video: K. Miler [Jagiellonian University, Poland].

Highlighting the article written by M. Motro, U. Motro and D. Cohen in Insectes Sociaux

Investigations of colony founding by groups start with the question: What happens if an animal that could survive perfectly well on its own is confined with others of the same species? Queens of the harvester ant species Messor semirufus typically found nests on their own, but occasional observations have been made of small groups of queens founding nests together. Many species of ant solitary queens initiate colonies, but in some species groups of queens come together and co-establish a nest. In this issue of Insectes Sociaux, Motro et al. (2017) investigate the outcomes of keeping M. semirufus queens in small groups. This study fits with a growing literature on how social cooperation might emerge when solitary animals are placed in groups by looking at success of group colony foundation in a species which normally does not express this behavior.

When animals have no option but to occupy the same space, the first obvious outcome is battle and possibly cannibalism. Second, the animals could ignore one another, perhaps only interacting if competing for a limited resource. Third, they could start working together to modify their environment, making it more suitable for habitation, and possibly they could collaborate in provisioning and caring for young.

This third outcome is highly significant to our understanding of the evolution of eusociality. If cooperation and division of labor emerges in a forced grouping, then many of the tools needed for successful eusocial living are already at hand. In some species of ant multiple queens come together to found nests. These groups work cooperatively and ultimately either transition to monogynous colonies via queen or worker culling of queens or become fully functional polygynous colonies. In these cases, whether the outcome is monogyny or polygyny, groups have survival advantages over single foundresses.

Motro et al (2017) found that pairs of M. semirufus queens performed less well than solitary queens at nest construction and that mortality was higher in pairs. Aggressive interactions, rather than cooperative behaviors emerged when ants were paired, suggesting that in this species queens attempt to usurp other queens’ nests, rather than joining for the benefits of mutual assistance. Crowding and difficult environmental conditions, exemplified by hard soil, favored co-founding in this species. Motro et al (2017) suggest that such forced associations could lead to selection for mutual tolerance, which is a critical first step in the emergence of cooperation.

Messor is a particularly interesting target for these experiments because similar studies have been conducted in another seed harvesting ant, Pogonomyrmex. The two genera are relatively phylogenetically distinct within the Myrmicinae (Ward et al. 2015) but have similar nesting and trophic biologies. Pogonomyrmex californicus queens found colonies singly at some locations (haplometrosis) and in groups at other locations (pleometrosis) (Overson et al 2014). The behavior of M. semirufus more closely resembles the haplometrotic populations of P. californicus.

Particularly notable about this study is that the data were collected a full quarter-century ago. This shows that careful studies with thorough documentation can retain their value. The value of this study perhaps even increased over time, as the theoretical framework about emergent cooperation developed and data were published on forced associations in other species of ant.

Studies of emergent cooperative behavior in groups of animals will continue to play a key role in improving our understanding of the evolution of social behavior. While this study of harvester ants found no advantage in living in groups, it reminds us that a key gateway to group living is social tolerance, and that even if ecological circumstances force animals into close proximity, there are other barriers to establishing a cooperative relationship. The evolution of the breakdown of those walls should play a key role in studies of social evolution.