Army ants are predatory and nomadic. To find food, the army ant Labidus praedator marches in carpet-like swarms both on the forest floor and underground, very different from most ants that you likely imagine walking in neat rows. Army ants have temporary nests that they can move around called bivouacs. Bivouacs are constructed from clustered, interlocking bodies of worker ants that are not foraging for insect prey. Bivouacs can either be free hanging aboveground or within a cavity or series of cavities belowground. In fact, other arthropod species live within the bivouacs. Army ants are important ecological keystones in the tropics, largely because of the other arthropods that rely on them for food and shelter while living within army ant bivouacs.

Bivouacs allow the ants to thermoregulate- warming and reducing temperature variation to accommodate the specific thermal needs of the colony’s maturing brood (eggs, larvae, and pupae) suspended within the bivouac. However, of the approximately 1,000 species of army ant in the world, all of our understanding of bivouac thermoregulation comes from only two species that form aboveground bivouacs. Research has shown that aboveground army ant bivouacs at low elevations can actively warm brood, but until now underground and high-elevation bivouacs were poorly understood. 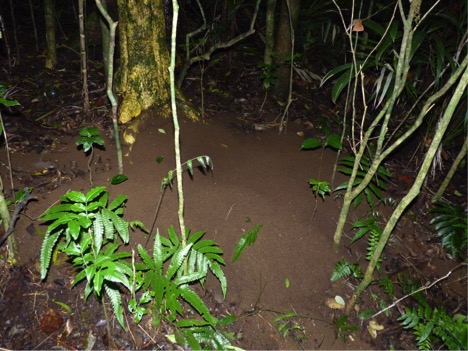 Montane bivouacs of L. praedator have a different structure than lowland bivouacs. Though lowland L. praedator have historically been observed nesting in preexisting cavities, often with other species of army ant, these high-elevation ants construct largely self-excavated bivouac chambers at the base of trees, seemingly independent of other army ant species (Figure 1).

In our study, we examined underground, lower montane L. praedator bivouacs to ask:

In order to find out, we placed temperature and humidity loggers at different depths in an underground bivouac of Labidus praedator and also in adjacent soil. After five days of recording we excavated the bivouac, keeping careful notes on depths at which we found brood, young adult workers, mature adult workers, and inquilines.

We found that L. praedator bivouacs were significantly warmer than reference soil. Temperatures within the bivouac were on average 6.2°C warmer than soil at similar depths, and more than 8°C warmer than average nighttime surface lows. Both reference soil temperature and bivouac temperature varied little at depths of 40cm below the forest floor. Together these two findings suggest that army ants may passively use soil to buffer against diel fluctuations in temperature, while actively warming the nest with their collective metabolic heat. Below-ground bivouacking species of army ant are able to survive at both higher latitudes and elevations than their highly-studied aboveground relatives. The thermal buffering effects of soil are likely key to creating a homeostatic and warmed brood environment despite seasonal and daily low temperatures.

Thermal tolerances of bivouac-resident millipedes and ants varied, and this variation corresponded to placement within the bivouac. More cold-sensitive individuals were located deeper in the bivouac where they experienced hotter and less variable temperatures. Callow and mature L. praedator workers had the same heat tolerance, but callow workers were more susceptible to immobility at low temperatures. The most cold-sensitive, however, were the millipedes, many of which had minimum tolerable temperatures at or above temperatures occurring on the bivouac surface. This suggests that warmth within army ant bivouacs may be an added benefit for arthropods that live in bivouacs at high elevations, enabling some bivouac-dwelling species to occupy geographic ranges that they would not be able inhabit without the ants and their bivouacs.

Editor’s note: You can find the video above and many other ant videos on Kaitlin Baudier’s YouTube channel AntGirl