As recently mentioned in a previous Insectes Sociaux blog post, the quarantine has affected the usual way of life for everyone, including us, the nerdy academic social bug people. Personally, with the lab being essentially closed, I had to come up with a contingency plan to keep the 25 million termites reared in my lab from being neglected, which would have led to their inevitable demise. The thought of a potential massive loss of irreplaceable live biological material tends to keep me awake at night. Also, like many of you, graduate students’ projects are essentially stalled, and even my fieldwork is on a hiatus, as most of my sites are on city parks, which are closed for an unforeseeable future.

With the initial delusional thought of taking the opportunity of this lockdown to write grants and to finish some longstanding manuscripts, I quickly came to the brutal realization that, while stuck at home with a 4yr-old kid, my academic productivity would effectively come to a halt.  Full-time parenting is not compatible with much else according to academic chatters on twitter, and I had to deal with this imposed situation and make a necessary readjustment of priorities. My daily routine now consists of homeschooling activities, but as I am lucky to have a decent size Florida backyard, I was eventually able to connect lessons and bugs in an educational setup.

I, therefore, started using the backyard as more than just a playground: this is a place of wonders and miraculous bugs. A backyard with a diversity of plants, birds, and insects can immediately become a fertile ground for observations and life lessons – pollination, decomposers, food chains, invasive species, photosynthesis, microbes, bugs, and more bugs. The list of topics is wide and, with some imagination, approachable for the young mind. As my daughter tagged along with me to look at ants, mealybugs, termites, ladybugs, planthoppers, mole crickets, butterflies, and many more, it also had the indirect effect of keeping my sanity in this weird new normal. I also took on the opportunity to start taking photographs of bugs for an image book of “name that bug” she would eventually share with her class when things are back to normal. 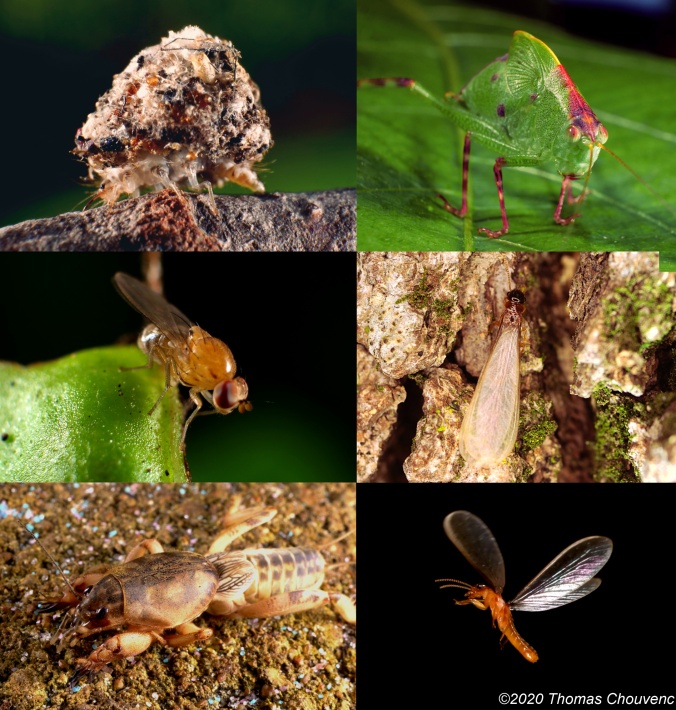 However, taking pictures of insects is an art, and regularly checking on the bug twitter-verse with some amazing insect photographers makes you feel small and humble (and makes you reflect on how miserable you are). This sparked a motivation to use this downtime as an opportunity to actually learn insect photography and hopefully improve my skills. On top of taking pictures of flying termites and other random backyard bugs, I took on the challenge to attempt documenting an obscure ant species and eventually went down the rabbit hole. What was I thinking? For this, let’s go back in time and explain how I got to this situation.

In 2017, when a tiny yellow ant species showed up in my Florida backyard, I initially thought that this was the commonly found Wasmannia auropunctata (the little fire ant), because of its size and color. I did not investigate much further, because after all, I was more of a termite guy. But my spouse eventually shared with me her annoyance when they started showing up in the kitchen, in @#$%! large numbers. After a quick ID session, we realized we had a new ant record in the continental US: Plagiolepis alluaudi, The Alluaud’s little yellow ant. It is native from Madagascar but has spread in various places around the tropics. 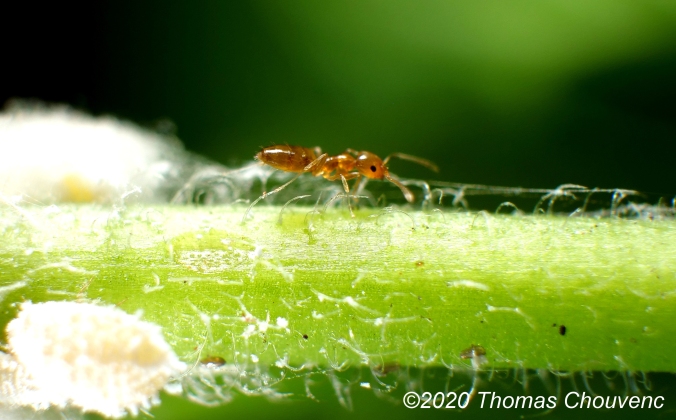 Less than 2mm in length, extremely polygynous, and presumably exhibiting unicoloniality, it rapidly became dominant in the neighborhood, and this newly found invader spiked my curiosity about invasive ants in general. After all, with about 250 species of ants in Florida, approximately 1/5 of them are invasive species (Deyrup 2016), and Plagiolepis alluaudi was now added to the list. I looked into what else was around and found common tramp ant species that already had reached the status of global invaders: Paratrechina longicornis, Pheidole megacephala, Pheidole navigans, Brachymyrmex obscurior, Camponotus sexguttatus, Monomorium floricola, Tapinoma melanocephalum, Technomyrmex difficilis… I came to the sad conclusion that almost all ant species in my urban backyard were invasive tramp ant species.

However, most of these ant species have been well documented because of their long history of invasion and their wide distribution in the Southeastern US and because of their potential economic and ecological impact. In comparison, this newly found little yellow ant has only been found in a few localities within Broward Co. (FL), and the literature on Plagiolepis alluaudi is mostly non-existent, except for the documentation of its wide distribution across the tropics. More problematic: its size. It is difficult to manipulate, contain, and experiment with; ask my graduate student who inherited the project to document the biology of this species. Everything about this ant species make it challenging to study.

One of the many frustrations from this tiny ant species, beyond its annoying presence in my kitchen and its difficulty to study, was my inability to properly document it with quality visuals. I attempted to document it on a twitter account dedicated to it (@ant_yellow)  but, this “side project” was rapidly placed on the backburner and neglected, as I had to rethink my priorities while being in a tenure track position: Termites first. Then, COVID-19 arrived. Spending time in the backyard meant that I would get to see them everywhere, all the time. It, therefore, gave me some time and motivation to (finally) look closer at Plagiolepis alluaudi. In the evening, I spent time on YouTube for advice on how to shoot bugs in macro, what options on my gear I needed to use, light requirements, etc.

I realized that shooting videos at 24fps in macro for this small ant would not work. These ants were too fast in the field of focus. I had to get closer, use tubes on my macro lens to get some focus at this magnification so they would not be the size of a pixel, and also had to switch to 180fps. This meant: I needed a lot of light. Let me rephrase. I needed a huge amount of light. I just happen to live in very sunny Florida, so it meant I had to learn to take videos using sunlight while avoiding the shadow of my own camera. Not easy when you are less than 2cm away from your subject, and I had to learn the hard way. Then, I spend some time learning the basics of movie editing and asked a couple of musician friends to help with the soundtrack. I was eventually able to put together an educational video aimed at the South Florida community to help raise awareness about this new invasive ant species. But in all reality, I just wanted to show this ant to the rest of the world. I came around to actually appreciate it.

Enjoy, keeping in mind that this is my first attempt to really do a macro video:

Let’s be honest. Without the quarantine, I know that I probably would never have the chance to take the time to learn some basics of macrophotography (Bugshot Florida 2020 just got cancelled 😦 ). I know I still have so much more to learn and improve my skills, but at least I finally got started to work on them. These dramatic times in our life are not easy for anyone, but I am fortunate to have a backyard full of wonders to go explore every day, which makes the quarantine easier on us all. And with this unexpected opportunity, I was finally able to take the time to look closer at this new invasive ant species.

An alternate version of this story was published in Entomology Today.

3 thoughts on “Of Bugs and Kids, during quarantine”