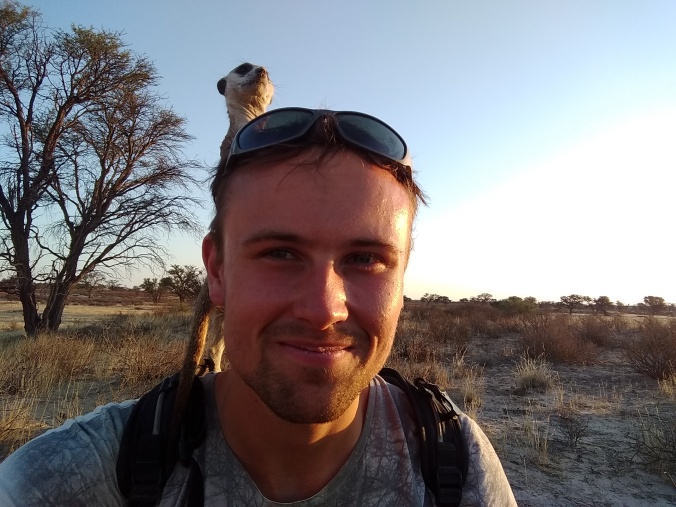 GB: My name’s Graham. I’m a master’s graduate from the University of Exeter, coming to the end of a year working as a volunteer research assistant in South Africa for the Kalahari Meerkat Project. I’ll be starting a Ph.D. back at Exeter in September on Banded Mongooses.

IS: How did you develop an interest in your research?

GB: I’ve always been interested in sociality and how it’s evolved, and ants specifically can form such huge and complex groups, with multiple distinct castes. Many species are intensely territorial, with group size and make-up largely determining success; therefore, conflict may have been a significant driver in the evolution of ant societies. But the threat of competition is not necessarily ever-present and being ready for battle all the time may be wasteful, so an intriguing question is whether coordination and behaviour of these complex groups can plastically respond to the level of threat in the local environment in response to cues, which is the subject of our paper.

GB: Termites moult multiple times before reaching their adult forms, but some primitive species can moult backward in time to a younger form! They’re therefore able to plastically change their development in response to the colony running out of resources. They can also switch development between different castes if they like to a certain extent, which I just find super cool.

GB: I haven’t done too much of my own research so far, but I (but mostly my dad) did start a meme where scientists left Amazon reviews for items they used in their research (but not based on the intended purpose). Started when we had the idea of using tea strainers to protect ants we introduced into another colony, and my dad left a review about how great a capsule for ants these tea strainers were (anything to get his ranking up!), which the tea drinking public found a bit odd/hilarious. It became the top review, started a twitter trend of other scientists leaving similar reviews, which got picked up by The Washington Post (easy to find on Google!). I even did a couple of phone interviews. It was all very surreal but definitely memorable!

IS: Do you teach or do outreach/science communication? How do you incorporate your research into these areas?

GB: Again it’s a bit early in my career to answer this question, but I have lead turtle conservation tours in North Cyprus, and Meerkat research tours in the Kalahari, which did involve communicating the science of what we were doing to the public. I hope to do some demonstrating and maybe teaching during my Ph.D.

IS: What do you think are some of the important current questions in social insect research and what’s essential for future research?

GB: Broadly the big issue, not just for social insects, is climate change. Does the level of sociality mean these species are more able to shift their ranges or, if they can’t, can they deal with new competitors or enemies that can (as well as changes in temperature itself), over other less social species?

IS: What research questions generate the biggest debate in social insect research at the moment?

GB: I fear I may be a bit naive at my career stage and may not have enough experience on social insect research generally (beyond group conflict) to comment on this. However, what I have found to be controversial is the definition of eusocial when looking at non-insect taxa. For example, there was a lot of buzz about naked mole rats being the first eusocial mammal due to their large groups and division of labour among reproductives and workers, but recently many have turned against this. You could even say the same for humans where, even though we don’t have fixed caste determination, we have orders of magnitude larger and more complex societies then eusocial insects in terms of numbers and the division of labour we see in the variety of jobs we can pursue. Maybe it’s just unhelpful to use the term for non-insects.

GB: Ultrasociety. Phenomenal book looking at how human societies have changed and evolved from egalitarian hunter-gathers to incredibly unequal archaic societies led by God kings, to how religion and war shape these into the relatively more equal modern societies we see today.

GB: Try to not have your research as the only focus taking up all of your time. Get involved in a sport, volunteer, or just something to focus on that isn’t science / your degree, so when you do get stuck you have something else to work on that refreshes you for when you come back to your science.

GB: Anyone at the Kalahari Meerkat project, or who went with me on my expedition to Madagascar over a year ago, can vouch for me when I say I’ve almost already done this, but on the island of an isolated research base (days of travelling away from the nearest major town with no communication with the outside world in the case of Madagascar). Anyways, I’d bring a Kindle with a vast library of books so I can read to pass the time, a snorkel and fins (since I’m on an island I might as well enjoy the marine life), and a Camelback so that I don’t have to carry a water bottle around in my hands.

IS: Who do you think has had the most considerable influence on your science career?

GB: Again, I’m very early into my career, BUT I would have picked a Natural Science degree rather than Zoology at Exeter if I hadn’t read the Selfish Gene and Extended Phenotype during the summer before year 11. This made me incredibly passionate about evolution, especially of behavioural strategies. I am so thankful I made that decision, so for that alone, Richard Dawkins.

GB: Well, I’m not exactly old myself… but just read some books about behavioural ecology/evolution and see if you get hooked. If you do and find yourself on a zoology or similar degree, read up on the profiles/publications of all of the lecturers at your university and seek the ones that share your interests / get involved! Do this early, and you may be working with them on your thesis later on and perhaps beyond.