Written by Jackson A. Helms IV

When most people think of ants they probably picture a colony of wingless workers. Seen this way, it is easy to forget that ants are really just an odd family of wasps. Most ant queens, on the other hand, are indeed wasp-like, possessing wings and the ability to fly.

After maturation, virgin queens leave their birth nests and fly out into the world to mate, find a place to live, and start their own colonies. These aerial explorers—the mothers of the ant world—fascinate me. While most ant enthusiasts spend their time looking down at what worker ants do on the Earth’s surface, I spend my time looking up at what their elusive queens do in the atmosphere. 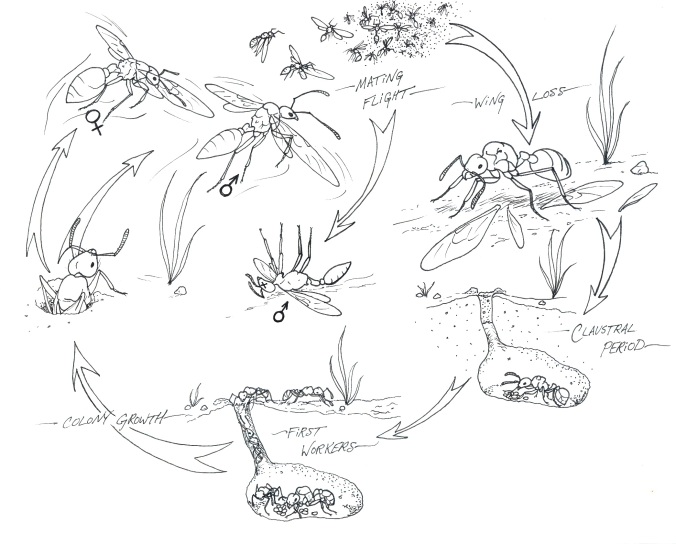 Ant life cycles are complicated and varied, but in almost all species the queens have wings and fly through the atmosphere to mate and find new places to live (drawing by Brittany Benson)

In our most recent paper, just out in Insectes Sociaux, my coauthor and I take a comprehensive look at queens from across the ant family to answer some questions about ant flight. How well do different species fly? Does flight vary depending on whether a queen hunts, farms, or acts as a social parasite that invades the nests of other species? How and why do some ant species lose the ability to fly?

To investigate these questions we compared queens of twenty-one ant species from Panama, ranging from the tiny Pheidole christopherseni (weighing in at less than a third of a milligram) to the grape-sized leafcutter ant Atta colombica (about 700 times as heavy). First we captured the queens on their mating flights using light traps hung in the forest. We then dissected them and examined their wings, flight muscles and abdomens to get some insight into how they fly based on their body size and shape.

As part of our analysis we measured all the queens’ wings, from the giant wings of Atta leafcutters (left) to the tiny feathery wings of Hypoponera huntress ants (right) (photos by Jackson Helms)

We find that just as there is seemingly infinite variation in ant morphology, physiology and behaviour, (over 12,000 known species and counting), each species likewise varies in how it flies. Based on our analyses of the 21 species we collected in Panama, we found that tiny species are nimble flyers and able to stay aloft for a long time, while large species fly faster. Queens from the subfamily Ponerinae (which are primarily hunting species), have agile athletic bodies and large flight muscles, making them decent all-around flyers. Soft-bodied tree-dwelling ants (subfamily Dolichoderinae) appear to have short, fast flights—probably just long enough to find a suitable hollow branch or snag to settle in. Socially parasitic queens, who take over or make their homes inside other ant or termite nests, can probably fly longer and farther than queens who go through the trouble of starting a colony from scratch. Leafcutter ant queens, who plant and tend fungus gardens, likely get a similar boost in flight ability. 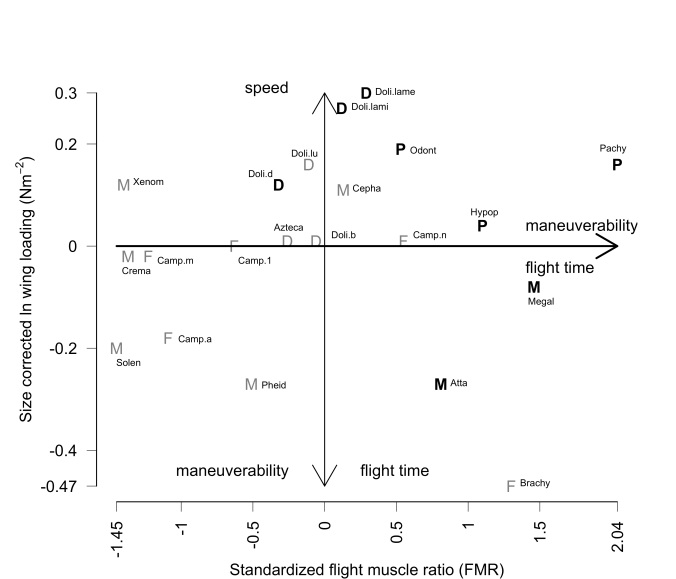 Each ant species has its own unique body type—shown here as flight muscle ratio and wing loading—that impacts how it flies. Queens located on the right or bottom of this figure likely are more maneuverable and have higher flight endurance for their body size, whereas those on the top probably have faster, but shorter, flights. (Figure from Helms & Kaspari 2015, Insectes Sociaux 62:171-181)

On the other hand, those hardworking queens who grow their own colonies through sheer individual effort, without the help of crops or a manipulated host species, have evolved the ability to carry extreme loads of fat and protein to fuel them as they start their massive families. In fact, we believe they can fly with more weight than any other known insect. The flight muscles of some species can carry nearly nine times their own mass! Not only do ants fly, but, by this measure at least, some of them are actually really good at it.

As for those species that have lost the ability to fly, permanently abandoning the skies of their ancestors and cousins, they may have done so in exchange for the ability to become extra fat and nutritious, thus ensuring they are productive mothers for the next generation. Tradeoffs like these are a pervasive theme in evolutionary biology (and pretty much everywhere else too).

As exciting as these insights are, they are based on only a tiny fraction of the world’s ant diversity. And we’ve conspicuously ignored male ants, which are also winged and wasp-like. What about them? How do they fly?

Male ants also fly, and some, like this Dorylus driver ant from a Ugandan rainforest (shown with the author), are among the largest ants in the world (photo by Alex Wild).

There’s still a lot of work to do before we come to a full understanding of flight ability in ants. We have, after all, only just begun to explore the hidden ant world above our heads.

About the author: Jackson A. Helms IV is a researcher at the University of Oklahoma. He can be reached by email at Jackson.a.helms-1@ou.edu or on Twitter @Marine_Ants.

One thought on “Ants in flight”