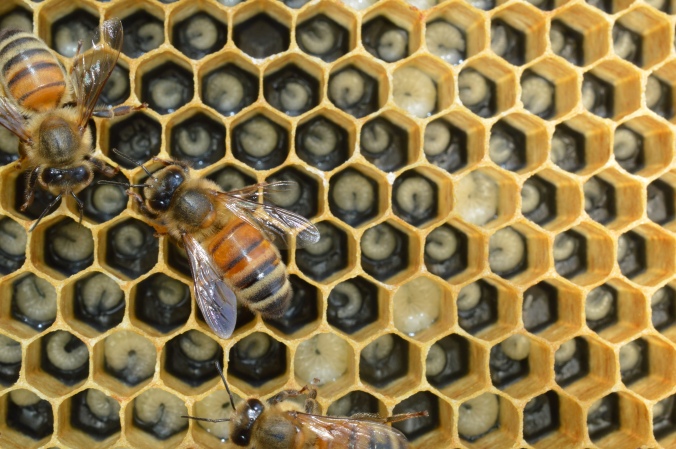 Nature can be hostile, especially for insects — tiny creatures that deal with big problems. They get eaten, they dry out, they get smashed. Believe it or not, insects also deal with even tinier pests and pathogens, just as we do.

Also, like us, insects have developed an immune system to combat such microscopic threats. Over the years, scientists have uncovered how insect immunity relates to behavior, mating success, ability to find food, nutrition, energy cost, etc. However, the method used to study insect immunity — sterile fishing line inserted through the membrane between the sclerites — does not reflect the evolutionary history of insects and their pathogens. In our recent paper, we describe a modified method to investigate insect immune strength and its specificity. We show that the insect immune system may be able to recognize different classes of pathogens and respond accordingly.

An insect’s first line of defense is a physical barrier: the exoskeleton. When the exoskeleton is injured, however, diverse pathogens can invade. Once a pathogen makes it past this barrier, the insect immune system uses proteins called pattern recognition receptors (PRRs) to recognize cellular patterns on the invader (pathogen-associated molecular patterns, PAMPs). One of the many responses the immune system can then carry out is the encapsulation response (ER) where the invader is surrounded by immune cells which secrete a protein, melanin, that detoxifies the invader.

The strength of insect ER is typically measured by inserting a piece of sterile fishing line into the insect, waiting for the immune system to respond, and then removing the fishing line “invader.” Researchers then use light microscopy to measure how much melanin (i.e., color) developed on the fishing line. The darker the explanted fishing line, the more melanin deposited, and thus, the stronger the immune response. While the fishing line does mimic a physical injury, it does not mimic the diverse pathogens with which insects have evolved.

To make this method more evolutionarily relevant, we added a layer to the typical method: PAMPs. Different pathogens have different patterns (PAMPs) on their surface that the host PRRs recognize. We tested honey bee ER in response to fishing line coated in PAMPs found on two types of bacteria and fungi. We call our modified fishing line implants PAMPlants.

Once we coated the PAMPlants, we carefully inserted them between two segments of the honey bee exoskeleton. This is truly a labor of love. Handling the coated fishing line (2mm long, 0.4mm diameter—tiny!) with forceps takes steady hands and attention to detail. Thankfully, two NSF Research Experience for Undergraduate fellows were around to help carry out this mini-surgery on the 176 bees it took for this study! To let ER happen, we left both uncoated implants and coated PAMPlants in the honey bee for 4 hours. We then carefully removed all implants, and prepared a microscope slide with the explant. Microscopy was used to take images of the explant. We analyzed the images for color (i.e., melanin) as the typical proxy for ER strength.

With this modified method, we show variation in honey bee immunity in response to different classes of pathogens. Since we saw an increase in ER for fungal and one of the bacterial PAMPlants, it is likely that physiological immunity is important for fighting these types of pathogens in honey bees. We did not see similar results for our third PAMPlant (peptidoglycan) which is found on some bacteria. In agreement with our results, honey bees likely combat this specific type of bacterial infection behaviorally rather than physiologically (Spivak and Reuter 2001).

When it comes to dealing with pests and pathogens, honey bees have it especially hard. In keeping bees, humans have unwittingly facilitated the spread of honey bee disease. In commercially raising bees, we have increased the density of honey bees across the landscape, and in some cases, we nurse weak colonies which are more likely to spread such disease.

The most notorious honey bee pest is the Varroa mite. This mite is the honey bee’s version of a tick. Ticks spread diseases in humans by puncturing our protective barrier (i.e., skin) and feeding on our blood. Varroa mites spread disease by injuring the honey bee’s physical barrier and feeding on the bee’s fat body—an essential organ for energy storage and immunity (Burnham 2018; Kielmanowicz et al. 2015).

15 thoughts on “Honey Bee Immunity: More Specific than We Thought”