A few species of stingless bees have fooled human observers. The queen, often seen on brood combs and exhibiting active egg laying, ceases her posture and hides herself between the food pots during an event known as reproductive diapause. Diapause is considered an adaptation that allows the queen (and colony’s) survival in adverse environmental conditions. This event is mostly common in temperate zones, but it also occurs in the tropics as an adaptive response to diminishing resources in the cold and dry season. 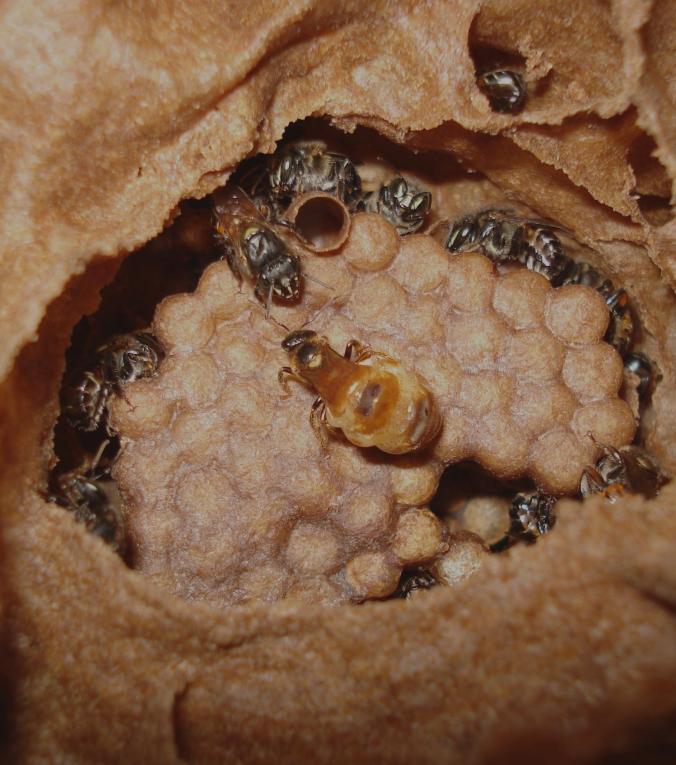 We observed that Melipona marginata queens gradually declined the frequency of oviposition in early May, and in the cold and dry months (to May from July) they ceased egg laying completely. Five out of six colonies we observed entered the reproductive diapause, suggesting that this event is facultative in Melipona bees and that this variation is determined by internal factors of the nests, such as the ratio of adults to brood and food stores.

The workers did not stop their activities and all behaviors related to colony maintenance were performed, such as queen feeding and food collection (although cell construction was stopped). However, the queens showed conspicuous behaviors. They walked through the entire colony, including in the food pots. The queens’ enlarged abdomen (a typical morphological aspect of post-mating stingless bee queens), did not disappear during reproductive diapause, but we observed that the posterior portion of abdomen decreased, suggesting oocytes were resorbed.

So, faced with the behavioral and morphological changes, why were queens not replaced by gynes when they stopped oviposition? The answer can be related to the chemical communication between the castes, which allows cohesion in the social insect colonies. The chemical analysis of Melipona marginata queens showed that the cuticular hydrocarbons profile does not change qualitatively during the diapause phase. Probably, this may explain why the workers have not killed the queens in this period, and why the workers did not lay eggs, a common occurrence in Meliponini colonies. Chemical and behavioral evidence suggest that two specific groups of hydrocarbons, the methyl-branched alkanes and alkenes, may act as fertility signals. The cuticular profiles of Melipona marginata before and during reproductive diapause had a greater and similar amount of hentriacontene isomers (alkenes). These results reinforce the idea that the chemical signals are crucial to maintaining the organization in insect societies, even in periods of adversity